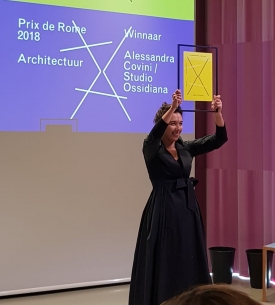 Architect Alessandra Covini (1988, Milan) received the Prix de Rome Architecture 2018 last Thursday 18 October from the Dutch minister of Education, Culture and Science, Ingrid van Engelshoven. Covini is awarded for Amsterdam Allegories, her proposal for the Sixhaven area in the North of Amsterdam.
Covini graduated from TU Delft in 2014 and set about establishing a private practice, which led to the founding of Studio Ossidiana in 2015. Covini focuses on the material qualities of objects, spaces and buildings. She is an architect who also works in the field of visual art and design.

The complete jury rapport can be found in the publication Prix de Rome Architecture 2018.

The Prix de Rome 2018 is accompanied by a publication that focuses on the nominees’ work. Except the jury report and documentation about the four proposals, the publication contains a.o. an essay written by Louise O. Fresco, interviews by Sander Heijne and photos by Sem Langendijk. The publication is published by nai010 in cooperation with the Mondriaan Fund.

The Prix de Rome is the oldest and most prestigious award in the Netherlands for architects under the age of 35 and visual artists under the age of 40. The aim is to trace talented architects and artists and promote their further development and visibility. Since 2012 the organisation and funding of the award is handled by the Mondriaan Fund. This edition of the Prix de Rome focuses on two extremes in architecture: urban design and landscape design. These extremes were covered in two consecutive rounds with fictive assignments. The first round, Low Pressure, was an open competition that addressed a specific rural area in the province of Groningen. From a list of 66 submissions an international jury selected four candidates for the shortlist. They concentrated on High Pressure, an assignment in a popular urban area, the Sixhaven area in Amsterdam North.

The work of the finalists can be viewed at the exhibition by Het Nieuwe Instituut untill 10 March 2019.