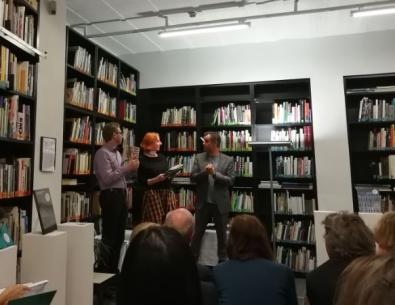 The next few months are filled with book presentations and exhibitions. We have listed them down here for you.

Spots in Shots - Narrating the built Environment in Short Films

Author Mélanie van der Hoorn will be speaking at this edition of the talkshow Architecture Now.

The Prix de Rome is the oldest and most generous Dutch award for architects below the age of 35. The purpose of the award is to identify talented architects and visual artists and to encourage them to develop and increase their visibility.

This edition of the Prix de Rome Architecture focuses on two extremes in architecture, urban planning and landscape architecture. These extremes are featured in two rounds, based in two very different locations in the Netherlands. The international jury of the Prix de Rome has selected four architects for the shortlist of the Prix de Rome 2018. The nominees are: Alessandra Covini / Studio Ossidiana, Bram van Kaathoven, Katarzyna Nowak en het duo Rademacher de Vries. For the final round the four candidates are challenged to make a fictional design for the Sixhaven area in Amsterdam.

From 19 October onwards Het Nieuwe Instituut presents the work of the four nominees for the Prix de Rome Architecture 2018.

Too Big - Rebuild by Design

19 November - Talk and Book Signing
Too Big tells the inside story of the American federal response in the wake of Hurricane Sandy. The late 2012 storm that ravaged the New York-New Jersey region revealed the true physical and social vulnerabilities that all coastal cities face from sea level rise to extreme weather events.

Get the inside story of Rebuild by Design at this book talk and signing. Henk Ovink, Dutch special envoy for International Water Affairs and principal for the Obama Administration’s effort, explains the innovative process he led, which was focused on building coalitions and running an intense international design effort. Register for free via: National Building Museum Washington D.C.